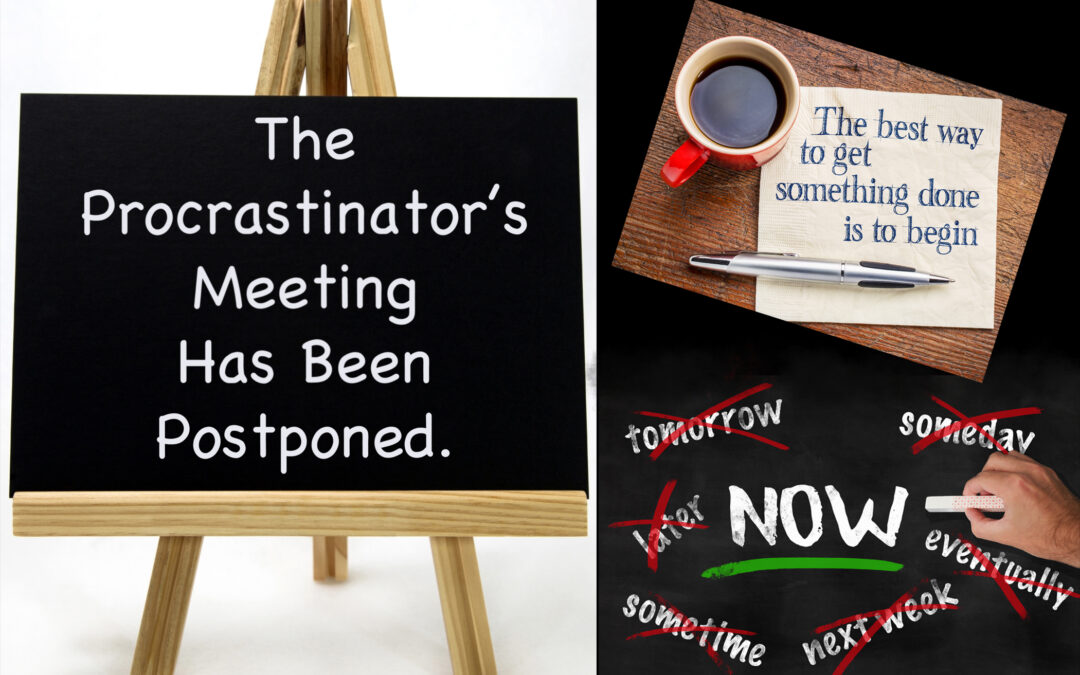 I’m embarrassed to say that I’ve been guilty of engaging in several of these delay tactics at one time or another. Some of what I discovered made me think, “Yikes! Is that me?”

It can be to take a cold, hard look at why you may not be accomplishing as much as you would like to and to acknowledge that you may be self-sabotaging. Committing to meaningful (and immediate) change will up your chances of achieving your most cherished goals.

Here are a few traits that indicate that you might just be a procrastinator:

Note: I admit to being guilty of this one when I was younger. Until someone pointed out that it is inconsiderate, rude, and disrespectful to be late without good reason, no one is perfect. Sometimes the unexpected happens. You end up running late. In that case, the least you can do is call to say you are running behind and will be there asap. But if you are late showing up without even thinking about what it looks like to everyone else, you’re just rude.

I have a friend who always knows just how to drive a concept home. I was supposed to meet him for dinner and showed up quite a bit late—no good reason. Just always running from one thing to another and never really thinking about how it feels to be the one waiting for someone to show up. I apologized, but apparently, I had done this too many times. So, my friend pointed out how he felt – that my constant lateness was inconsiderate and rude. I tried to give some lame excuse. Then he said something that stuck with me to this day. “I’ll bet if a million dollars was waiting for you if you arrived when you were supposed to, you’d not only be there on time – you’d be there early!”

Note: Sometimes my hubby is good at looking busy but not getting things done. Especially if there’s something on his ‘honey-do’ list, he’d prefer not to do. My favorite story illustrating his gift for creative delay tactics is from the time we were putting down new floor tiles in the kitchen (in our first home in Willis).

Steve kept talking about how the tiles had to go in in such a way to end up with all the cut pieces under the fridge and stove, which had to be measured from the middle out, etc. After a couple of days of this, I waited for Steve to take a nap – then put the floor down in just over an hour. He woke up, looking for all the mistakes I must have made. I told him I just started in one corner and finished in the area where the appliances stood, and voila! – the cut pieces ended up under the fridge and stove, just as they should.

Of course, I didn’t tell him about the little section where I had to take a hammer to the corners of four tiles that didn’t quite fit, but they were under a rug by the sink, so I figured what he didn’t know. (lol!)

The point is that procrastination can show itself in someone trying to look busy but is just avoiding getting things done.

Although I like things neat and organized, there are times when I would flip if someone came for a visit without notice. I feel much better when I make time to get the house or office looking like someone cares. Sometimes it feels like all those little things that need doing are fussin’ at me so that I can’t relax until the house looks like a home again.

Some folks thrive on chaos. A bit of dust and clutter don’t phase them at all. For me, a cluttered house or workspace makes it harder to focus on my work. I think and write much better when my home and office look clean and organized.

Do you know how many people have told me over the years that they want to write a book? But most never write much of anything or take workshops to learn the craft. I suspect I’m not the only writer with a collection of unfinished manuscripts stowed away.

Sometimes it’s because we genuinely get ‘stuck’ or lose interest in a project. Sometimes, you are afraid to commit to the project entirely. For me, when it comes to fiction, I think it’s fear of rejection that keeps me from taking a chance in sending my babies out into the world and hoping someone will find them worth reading.

One of my goals now that I’m writing full-time again is to look at any unfinished business, decide if a manuscript is worth breathing life into again and take a leap of faith by finishing them and sending the mouth. The worst that will happen is they will suck, but maybe there’s a best-seller in there somewhere (wouldn’t that be amazing!).

That’s all I have to say for now about procrastination. If you recognize yourself in some of these examples, take time to brainstorm ways to avoid such self-defeating behavior in the future. You can do it. I have faith in you!